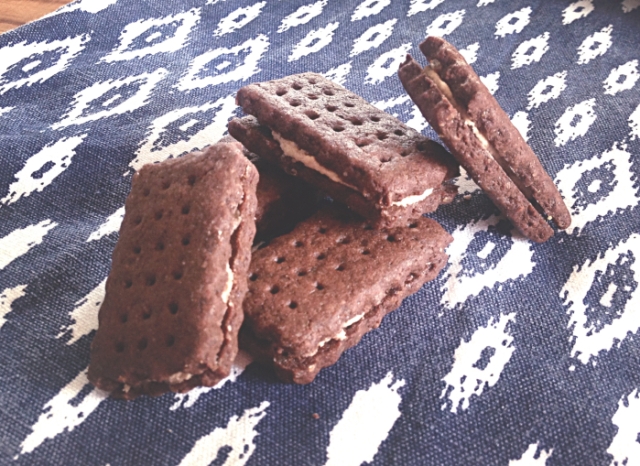 I have a bit of a thing with cooking in that I love ‘reverse engineering’ recipes. That is, I love guessing the recipe and taking time to get it to as an exact replica as I can. It’s not just with baking but with all cooking, for instance trying to work out what’s gone into the paste to make a Thai curry I’ve enjoyed or the Grassmere-style gingerbread recipe that also features on my blog.

The recipe for Bourbons was one of the first I ever worked out as a ‘reverse-engineering’ exercise and rightly or wrongly I’m quite proud of how it’s turned out. I genuinely believe it is a near-as-dammit recipe to the shop-bought ones (although still keeping that extra-special homemade taste) and is totally from guess-work and trial and error to get it perfect. It has three types of sugar in: each brings a specific taste and does a specific job within the recipe. Icing sugar melts in with the butter and provides the bulk of the sweetness, soft brown sugar (or demerera) provides that more nutty flavour and because it’s crystals are larger takes longer to break down and combine in the cooking process from the heat, and finally the golden syrup is needed to help bind and without it the biscuits don’t taste like traditional Bourbons – you can definitely tell if it’s missing. Likewise with the ground ginger. Also, reciped that have cocoa only in the cream are definitely inferior! Go with the melted chocolate 🙂

If you do make it, please leave a message whether you think it stands up to the shop bought versions.

I do have a wavy biscuit cutter, which you can use if you have one, but I think the best results come if you have one of those wavy vegetable cutters (see pic below). You can make them straight if you do not have either.

There are several important things to making these biscuits ‘just so’. The main one is that they have to be uniform in size – take care to cut the same width and length of biscuit (I cut out a strip of card to measure against). Otherwise you’ll have quite the jigsaw trying to match up two biscuits that are the same each time you press two together with the cream.

This makes about 54 biscuits that are around 5cm x 2cm long, which means 27 sandwich biscuits. If you want less, I’d suggest freezing half the dough as it’s difficult to make anything with half an egg.

Another important point is that the holes aren’t just there to make them look Bourbon-y, they also stop the biscuits from rising too much (as the dough contains egg it will rise a little).

Finally, one last thing: do liberally use flour where you are cutting and rolling out – and the white flour won’t affect the final biscuit (ie you won’t get a white dusted biscuit rather than a chocolatey one).

Ingredients – for the biscuits

Ingredients – for the sandwich cream