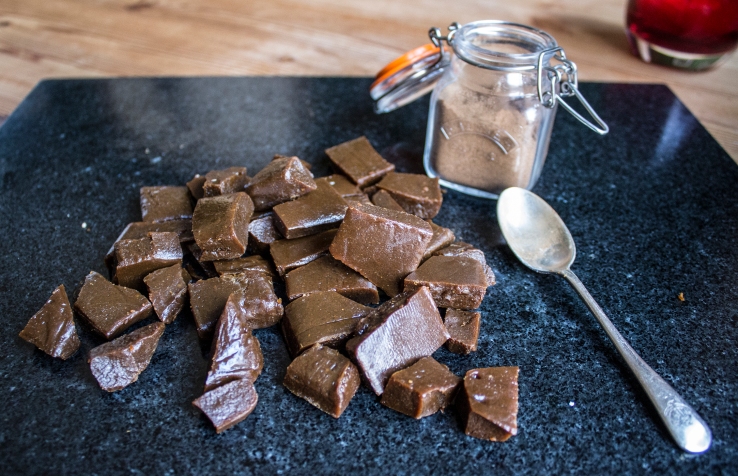 It’s Guy Fawkes Night as I start writing this recipe up – November the fifth. The night when fireworks light up the sky (and scare the wildlife and people’s pets) and bonfires blaze across the UK.

By  this date in the UK the weather has turned for the worst, the clocks have recently gone back plunging us into darkness an hour earlier in the evening and the big chill has set in. No matter that the winter solstice is still six-seven weeks away, it’s already wintry. Everyone has certain foods that are synonymous with the start of deep winter and evoke that combined smell of autumn leaves, burning fires and even sulphorous fireworks. These foods for me include old family favourites I was brought up with such as bangers and mash, seasonal thick soups, jacket potatoes and treacle toffee.

Over the winter I’ll make several batches of my winter toffee to share out, give as presents and, of course, a treat for ourselves. Just a few days ago I was lucky enough to be sent a batch of special speculaas mix from vanDotsch spices to try. I didn’t want to go straight down the route of making speculaas cookies (that’s too obvious for me – although I expect I’ll end up making a batch or two)  I thought I’d combine spice and confectionary. Turns out that the warming, spicy, Christmassy speculaas goes famously well with the creamy treacly flavour of my toffee recipe.

So what is speculaas?

If you’re thinking you’ve never heard of speculaas before there’s a high probability you’ve tried it without even realising it. Ever had a little rectangular ginger-y biscuit with your coffee? Those commercially made, bite-sized biscuits so beloved of coffee shops and baristas are speculaas biscuits. Speculaas is a warming, festive spice mix mainly associated with the Netherlands, although versions are also found throughout Belgium, Luxembourg parts of north eastern France and Germany under slightly different, localised names such as spéculoos (France) and Spekulatius (Germany).

It’s synonymous with those pretty, pressed Christmas biscuits. I read that traditionally families would have their own variations of the spice recipe and their own heritage biscuit moulds. Although the mix clearly differs from one household to another, all versions have a similar base which might include warming cloves, cinnamon, ginger, nutmeg, cardamom and white pepper. This mix from vanDotsch Spices comes from the company owner’s family recipe and has a ‘secret mix of six spices’ together with high grade cinnamon, cloves and ginger. I’ve been to the Netherlands a few times and have consumed quite a few speculaas koekjes (of course…) and, although I can’t compare side-by-side with a typical mix, this particular speculaas does taste pretty good to me.

Be careful!! All toffee is hot Hot HOT while you’re making it. Please don’t get burnt – wear long sleeves and use gloves when pouring the toffee out. 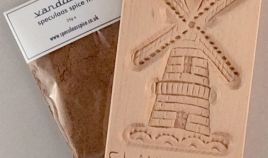 Purchase the vanDotsch speculaas spice mix online (you can even buy carved biscuit moulds too)  from the Speculaas Spice Company, which is run by Steven Dotsch, an Amsterdammer (or Mokummer) now living in London. This particular speculaas spice mix is based on his Grandmother’s unique blend.

If you have a small tray that’s roughly 20cm x 20cm (or more-or-less the same volume) then you can just line it with the foil, grease it with the extra unsalted butter and leave to one side

If you have a baking tray that is larger than this, you can ‘fake’ the right size by using foil. Rip off a sheet of foil that will cover the tray. Cover the tray with the foil and press it down into the sides and ‘corners’. Now, make a pleat in the foil to shorten the tray size and use the overhang of the foil to secure it in place on the tray edges

Delighted to say I have two photos shortlisted in this year’s prestigious Pink Lady Food Photographer of the Year awards, in the Food Influencers Category

Today is the autumn equinox, or Alban Elfed for the druids or Mabon for the Celts amongst us. It’s a time of bounty and the last warmth of late summer. I don’t have much space in the garden to grow a lot, but I do manage a few veggies and a lot of herbs and flowers. Here’s the latest small haul and yet another sourdough loaf. A mini cornucopia. Enjoy the equinox, somehow they always feel special.
I’ve got a new post and recipe up on my website. I’ve been reading up extensively on the four ‘happy hormones’ (serotonin, oxytocin, dopamine and endorphin) and how what foods you eat and how you eat and increase these, and have a positive effect on your mental health. I’ve also taken a lot of these foods and created an utterly delicious recipe: a fig focaccia. Also, it’s very pleasingly alliterative!! I hope you like both and please let me know what you think, I’m here or as a comment on the post. You can get to it via the link on my profile xxxx
On my own this weekend so a sourdough for one. I was trying out a new three feather stencil I’d made which is in two parts. It worked really well, and looked so neat… that is until I nearly dropped the loaf and put my big fat thumb all over it. Ah well, you still get the idea and I’ve got a stencil to try again!! Happy Saturday.
Last night’s dinner - turkey polpette (meatballs) in a rich tomato and pepper sauce and served with orzo pasta.
Butter zopf loaf, with nigella seeds and seaweed flakes. (See in the bread stories for what it looked like pre-bake).
I’m a lucky bunny - I won some Cawston Press drinks and a cute labelled glass. I entered their comp as it’s my favourite non-alcoholic drink (I get bored of only being offered lemonade or cola). Now I’ve said that I have to explain that I’ve ‘adulted’ this one into a rhubarb margarita!
A little trip to @welbeckfarmshop yesterday to scoop up some ingredients, included picking up some smoked garlic. I love the more delicate taste and not having a smoker, I can’t make it myself (I hear it’s quite easy? Does anyone know?). I wonder if you can do it at the end of a BBQ…?
Just a tiny selection of some specialist tools I own. Most of them are second hand, found in bric-à-brac shops, at specialist tool sellers at wild craft festivals. I have a vast proportion of leather tools that I bought secondhand from one single place: sadly someone was selling their recently passed father’s leather tools as they didn’t carry on the profession. They were pleased they’d sold it all to someone who was going to use it all, rather than break it up and sell it all on. I think about the continuation of skills when I use them, like on this little cross body bag.
Quiche Lorraine and sorrel salad - oh and the shortcrust pastry is black pepper and hyssop. 🌱 I don’t have enough space for a veggie plot but I do like to have a few unusual, tasty ingredients (especially herbs) growing in my little kitchen garden area to give life and a botanical twist.
A massive thank you to all the fabulous people at @creativelysquared - this is just the greatest and most supportive community of creatives. I just received the most amazing flowers (just a sweet few pictures here) 💐. Feeling very blessed!
Sunny afternoon, finished my first day back at work - it’d be rude not to, wouldn’t it? Submitting as part of the #pour challenge today for #enticingaction by @evakosmasflores
Homemade sourdough croissants. I made a big mistake in baking these - or so I thought. I proofed them overnight in the fridge as usual then turned the oven on and put them straight in without thinking. I only realised when the oven beeped to say it was at temperature that I’d put them in a cold oven. Turns out, best ever fluffiness on a sourdough croissant. So, not a ‘mistake’ rather a happy accident.